We’ve crunched the numbers from the 2017 Congressional App Challenge and results are amazing: 225 Members of the House of Representatives hosted local computer science competitions for students in their districts. The competition was unprecedented in terms of sheer participation as well as in geographical and diversity statistics.

The Congressional App Challenge (CAC), which has become the most prestigious prize in student app competitions, more than doubled in terms of participation over the previous year, and nine new states across the country were represented. In the course of three short years, the CAC, which is an official initiative of the U.S. House of Representatives, has achieved what no other initiative has been able to do: it has reached extraordinary levels of geographic and rural participation while garnering participation from underserved communities at record-setting levels.

We thought you should know about the amazing stats from the 2017 CAC detailed below. And we’ve provided a look ahead to our #HouseOfCode Demo Day in Rayburn and the start of the 2018 CAC.

This past year, the CAC increased state participation by almost 30 percent. The 40 states in dark blue represent those that participated in the district-wide competitions in 2017. The CAC outpaced the tech industry by reaching out to a wide range of students in terms of gender, race, ethnicity and geography. The following unprecedented growth is due to the CAC footprint, which included 225 US congressional districts. 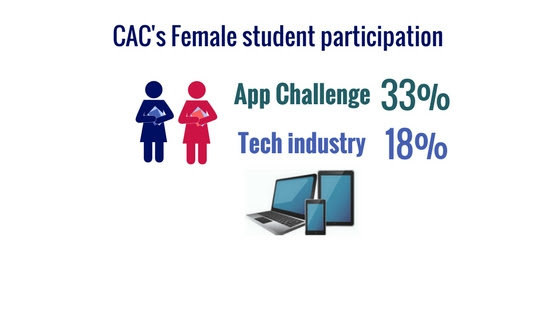 The CAC helped address the gender gap in the tech industry by reaching a new plateau with 33% of its participants being young women and girls. During the 3rd annual contest, over 1,600 female students were inspired by Congress’ coding challenge. “One of my goals was to increase the CAC footprint to ensure that all underrepresented groups had a chance to participate,” said CAC Director Rachel Decoste. ‚”I am proud that the App Challenge continues to surpass tech industry standards. It foreshadows the strength of the future of the U.S. workforce”.
2017 Congressional App Challenge Doubles in Participation and Addresses Tech’s Diversity Gap Our Student Participation Doubles / Diversity Numbers Crush SV’s Best | 2017 By The Numbers